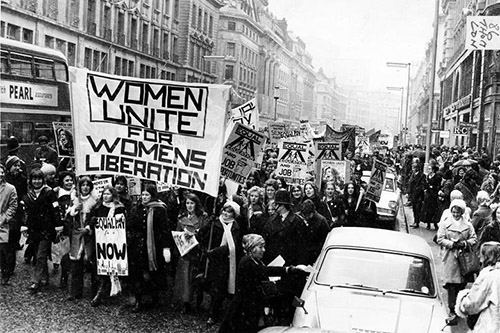 In my previous posts I have written about  the first Women’s Liberation Conference in February 1970 and the  imaginative protest at the Miss World contest in November 1970.

Another key milestone was  the first Women’s Liberation march which took place on 8th March 1971 in London (in freezing wreather, it should be noted). Organised by the Women’s National Co-ordinating Committee  and Ad Hoc Committee for the London March 6th Demonstration it was the first march on purely women’s  issues since 1926, assembling at Speakers’ Corner and processing to Trafalgar Square.

The idea was to bring women  together in support of the four demands of the Women’s Liberation movement:

The event  was planned with much  imagination  with banners stating “Women  Unite” and “Women’s Liberation”, a  twelve foot Old Woman’s Shoe,  a caged woman (Mis-Stress)   as well as co-ordinated singing, dancing and music and performances in the Trafalgar Square.

Surviving footage captures its fun aspect  and the sometimes bewildered reactions of passers-by.  Around 3,000 attended.

All demonstrations are fleshed-out polemics, happenings that have more to do with reinforcing solidarity within the ranks than luring spectators from pavement or box – conversions will come later, as fallout comes.

And so it was with the Women’s Lib demo on Saturday. I went unreasoningly fearful that me and my friend Ivy would be alone stomping down Regent Street, running the sneering gauntlet of Saturday shoppers. But there they were at Hyde Park Corner, all the lovely sisters, giggling and shivering and bawdy and prim, and I turned and turned again, gloating at the numbers before and behind, my motley frost-defying sex.

Because sex is all we really had in common. Odd to think, in the middle of Oxford Circus, that inside our over-coats, under our mufflers, coiled within our sweaters and vests is the same intricate reproductive system – fallopian tubes, uterii, vaginas, and breasts – and that that is why we’re here, on March 6, 1971, in the snow. When, since the beginning of time, have men ever marched because they shared a particular sexual apparatus? Ludicrous, shameful, ridiculous, perish the thought. 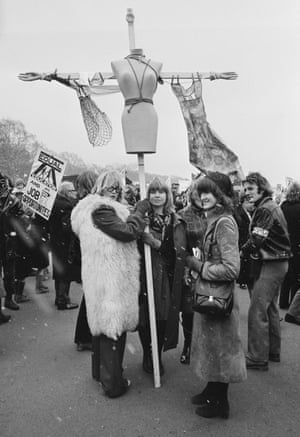 And when we arrived at Trafalgar Square the demo arranged itself into a symbol so apt as to seem planned. One girl at the mike, four girl photographers, and a solid phalanx of great, grey, brawny men blocking the view of the women. Get out, shrieked the women, get away, get back, and the men, genuinely startled, got back.

Communicators themselves, they communicated the women’s case – men, men, men, grouped at the foot of a soaring phallus with Nelson, a man, at the top. “Look at you all,” said a girl to a male photographer. “If that doesn’t tell you something about equal job opportunities, I don’t know what will.” The photographer looked as superior as a man can in a howling blizzard. “I’d like to see you going into a shower room full of naked men after a Cup Final,” he said. “I’d like to see you going into a changing room full of naked models,” she said. ” Try and stop me.” he said. “Try and stop me,” she said.

In the crowd a tiny “Gay is Good” placard vied gamely with a huge Women’s Lib banner. “Here, it’s our demonstration,” said Women’s Lib testily. “It’s against oppression, isn’t ?” snapped Gay Lib. “I was chucked out of my job last week because I’m gay. We’re more oppressed than what you are, any day.” Women’s Lib raised her eyebrows in ladylike fashion and turned back to the platform.

A middle-aged woman in fur has been lured from a bus stop to join the march. “I’m a graphic designer and what do I read in a trade magazine last week? Some man complaining about how difficult it is to get a job at 45. Huh. I’ve had difficulties getting jobs all my life – the moment they hear your voice on the telephone they don’t want to know.”

Another woman, skin flushed with Panstik, had a hand-scrawled notice pinned to the front of her tweed coat. “I’ve come all the way from Sheffield, I can’t afford the fare but I must do something for the single woman. We don’t get paid nearly as much as men but still we’ve got to find rooms, pay the electricity, feed ourselves. It’s not fair, it’s just not fair.” Behind the pebble lenses, her huge eyes watered. Then the speeches were over, vast congratulatory relief filled the square. The demonstration had happened (miracle) and it had happened well (greater miracle). Girls stood in groups, stamping and chatting:

“There was only one thing. The weather. The trade unions had such a marvellous day and we had to go and get this.”
“Well, love, what did you expect? God is a man.”

An article in the Women’s Liberation workshop newsletter  Shrew  (Vol3, no3)  reflected on what had been achieved – and not achieved

Male passer-by:  What do you want – Stuffing?

Woman in uniform:  “we’re not allowed to think…”

Woman in fur coat: “abortion makes me turn cold. It’s like shutting the stable door after the horse has bolted. “ 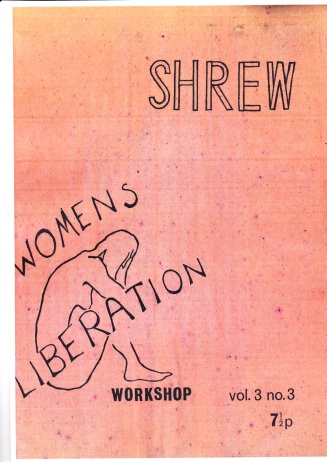 These remarks of bystanders at the demonsaration on Saturday, and the attitude of amused tolerance  in the press coverage of the march, must guide us in assessing exactly what we have achieved. The demonstration raisse certain questions  about our aims and strategy as a movement.  That over 3,000 women assembled in Hyde Park prepared to march despite falling snow and freezing temperatures w  sreason enough for spirits to be high. Not only the numbers present, but that these represented nation-wide support for our cause must be an encouragement. While we need to stand united in the face of press criticism of the demonstration and of the movement as a whole, it is important that our first experience of a national demonstration should provoke self-criticism within the movement.

What were we “demonstrating”: was this a demonstration of  of women’s solidarity  or was it an outing?  Was it a march, or a wander through the West End? In terms of appearances a useful  comparisons  is the New York Women’s Liberation demonsration of September 1970. Several thousand women, arms linked and chanting slogans, surged down Park Avenue, sweeping aisde police attempting to restruct the marchers to two traffic lanes. Police had barricaded sidewalks to keep public and demonstrators apart, and crowds gathered to watch the spectacle – expecting a circus. But, infected by  the determination of the marchers, middle-aged women  left their husbands and girls ducked under the barricades to join the march when challenged to do so. The uncommitted were made to feel that something important concerning them was at stake.

Given the British spirit of moderation in all things, in contrast with the polarisation on equivalent issues in American society, and that the British woman clings more conventionally to the passivity of her traditional  role – did we, in marching, really provoke or inspire women “on the side”  to commit themselves. Many, questioned on their attitude to the march, came out in favour of at least two or three of the four demands in point but had not been made to feel to demonstrate solidarity on the issues. Much more is at stake in the Women’s Liberation movement than equal pay, equal educational opportunities, state nurseries, free abortion and contraception:  the underlying   factor  is the liberation of woman  for independent  self-determination  as a human being.  To quote a hand-out  distributed on the march, “Social reforms do not necessarily mean a change in attitudes”. Female emancipation cannot be achieved simply be legisltaion as female  suffrage has shown.

If all we were  doing on March 6th was demanding social welfare  changes with which many can agree without any fundamental  changes in their  conception of and attitude to “woman”, what was the real confrontation of this demonstration?

We must avoid putting ourselves in a position in which  we can be fobbed off with superficial concessions and be left with nothing more to say.

All women  must be confronted with the fact that the liberation of women   requires a fundamental revison of the definitions of all human roles in society.  This raises the question  of the role of male support  of the movement: one one hand, their presence  on Saturday  gives weight to the liberated men and women  through the call to women to do something about their own position. On the other hand, the presence of husbands and boyfriends in the midst of “women united”  made us more vulnerable to jokey press comments and public amusement – and possible identification by the public as yet another group of “student revolutionaries”, rather than  as an unprecedented  assembly of women, demonstrating in the cause of all women.

If we failed to communicate the seriousness of the aims of Women’s Liberation perhaps we should ask ourselves whether our future efforts to communicate should now  involve a choice. One alternative is uncompromising militancy  which  most of neccessity provoke commitment or hostility to the movement, but which brings to light fundamental and radical  issues implied by women’s liberation.  Or do we try  to appeal to the mass of women in this country at the moment  who think they are in favour  – thus achieving a real following but running the risk of making  the four demands as end in themselves.

The moderate method  could be regarded as first step towards greather things ,  or as the removal of specific grievances, but at the possible cost of true liberation. 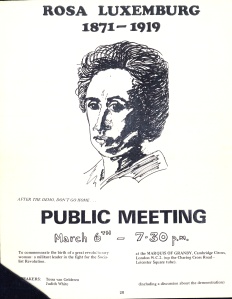